What Do You Do With that Ticking Time Bomb in the Attic?

Some families of aging U.S. war veterans are finding unexpected, and highly dangerous, souvenirs among their loved ones’ belongings—ticking time bombs.

Service members either brought the devices home from their combat service or purchased them later. Most of the devices found today come from World War I (which the U.S. entered 105 years ago this month), World War II, Korea, Vietnam, or the Gulf War.

Known as military ordnance, these devices can remain intact for decades but explode without notice. They are highly dangerous, and only a trained bomb technician should handle them.

That’s exactly what the FBI’s bomb technicians  do.

FBI bomb squads have disabled explosive material from as early as the Civil War; the Army Corps of Engineers found cannonballs from that era at the bottom of the Mississippi River when they were dredging in January. 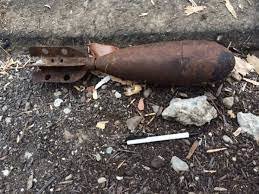 “Usually what happens is when a veteran passes away, and family members are cleaning out their items, usually in a basement, garage, or attic, they’ll come across something that they know or suspect is a military ordnance,” said Special Agent Patrick Carolan, a bomb technician with the FBI’s St. Louis Field Office. “They call their local police, and we work with the police department’s bomb squad.”

Carolan explains that if the ordnance is a U.S.-made device, the bomb squad has the experience and knowledge to handle it. They place it a containment vessel and take it to a bomb range for safe disposal. If the device was manufactured in another country, the bomb squad often calls in the U.S. military for expert assistance.

The FBI’s St. Louis Field Office typically gets about one call per week for suspected military ordnance. That number has accelerated in recent years with large numbers of elderly veterans now dying.

The office was so concerned about the safety risks that they launched a public campaign in January. They asked for the public to call in if they recognized any of these devices in their own homes. The bomb squad received 17 calls that week, and more came in in subsequent weeks as a result of local media coverage.

Carolan said people are often a little shocked and concerned to realize they or their loved ones have been living with such a dangerous item in their home, sometimes for decades.

“They are usually very surprised and relieved that we can take it off their hands,” he said.

Carolan encourages anyone who thinks they may have ordnance to call their local police department or 911 immediately.

“People are sometimes hesitant to call us because they think they’re putting us out. That is not the case. This is our job,” Carolan said. “We’d much rather come take a look at it and have it be nothing. We don’t want anyone to get hurt.”

You May Want to deflate that Bounce house. Here’s why.