Giggster combed historical archives to compile a collection of pictures that exemplify what the Big Apple was like during the 1950s. 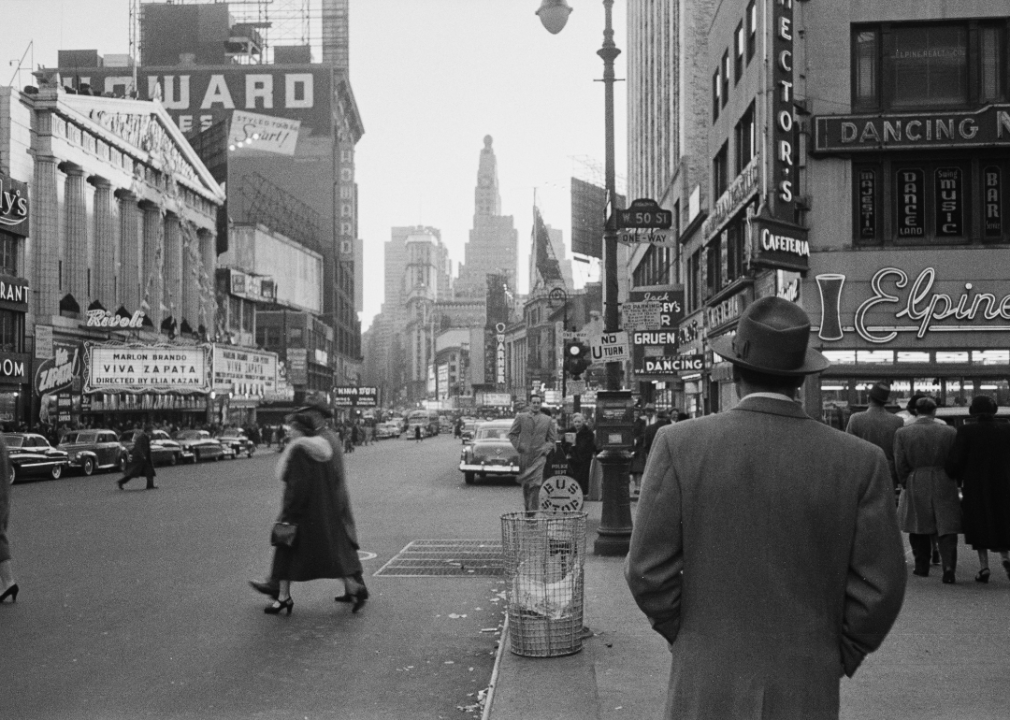 The 1950s are an interesting time in New York City's history. Having been established as one of the world's greatest cities following the end of World War II, New York was home to 7.89 million residents in the early parts of the decade. However, by the end of the '50s, the effects of suburbanization, which saw residents and industries alike leaving for cheaper pastures, actually led to a significant decline in population that would hold until the early 1970s. With this decline in population came an increase in crime, growing wealth inequality, and an overall step back for the northern metropolis.

There were other, smaller, changes the city experienced as well—the shifting of neighborhoods, for example, as Chinatown began encroaching on Little Italy, or the proposed renovation of landmarks like Grand Central Station and Central Park. There were differences in the city's economy, as certain industries began shrinking and more and more women joined the workforce. There was also plenty of growth—new museums, new buildings, new community groups.

It's hard to explain in words exactly what New York was like during the 1950s. So Giggster combed historical archives to compile a collection of pictures that exemplify what the Big Apple was like during the decade. From Times Square newsstands to the daily commute, keep clicking to see what the world's greatest city looked like some 70 years ago. 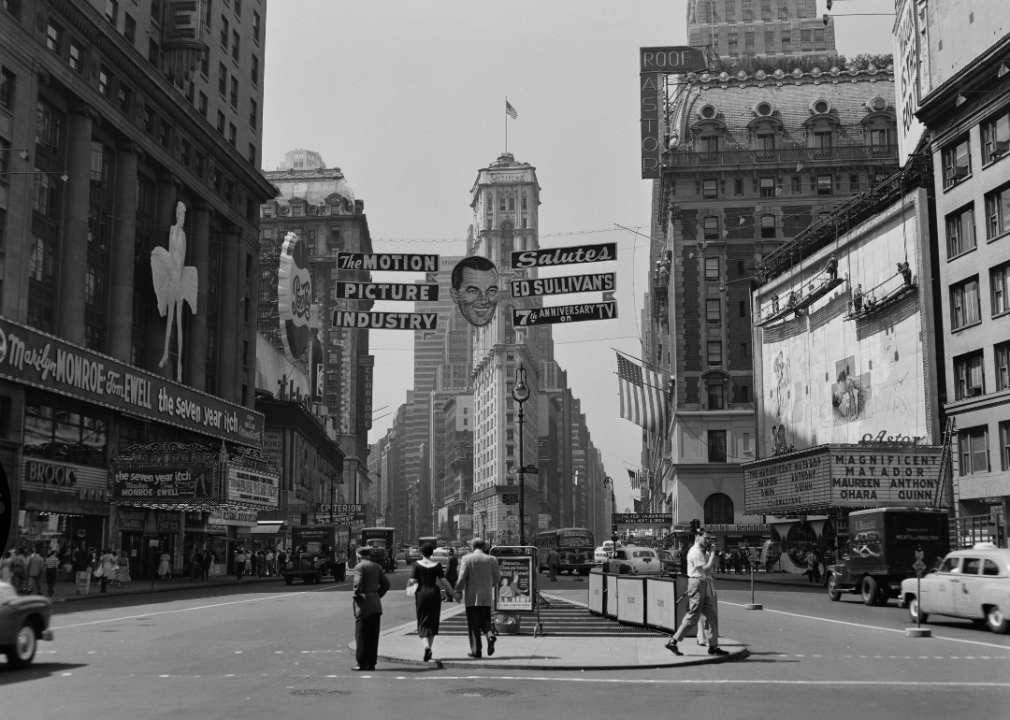 The most definitive and longest-running variety show of all time, "The Ed Sullivan Show" was filmed in a studio just north of Times Square. Here, an advertisement hanging in "the center of the universe" celebrates the anniversary of the most popular series of the '50s.

The rise of the career woman 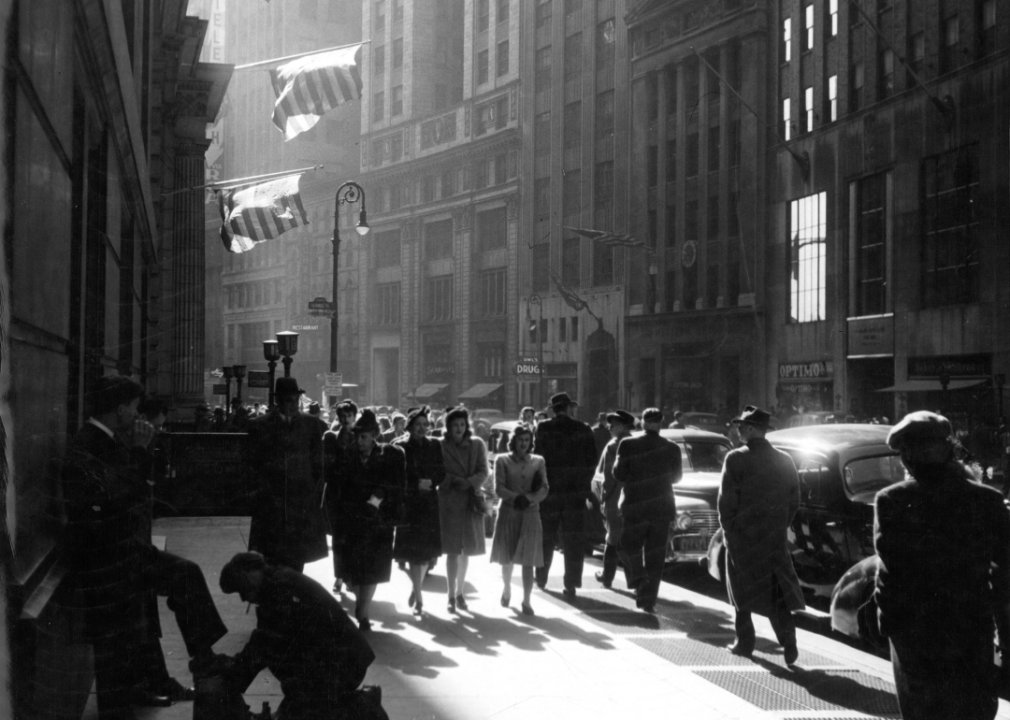 The 1950s saw the rise of the career woman, especially in expensive and progressive cities like New York. Here, a trio of well-dressed women head to their offices in Manhattan's financial district. 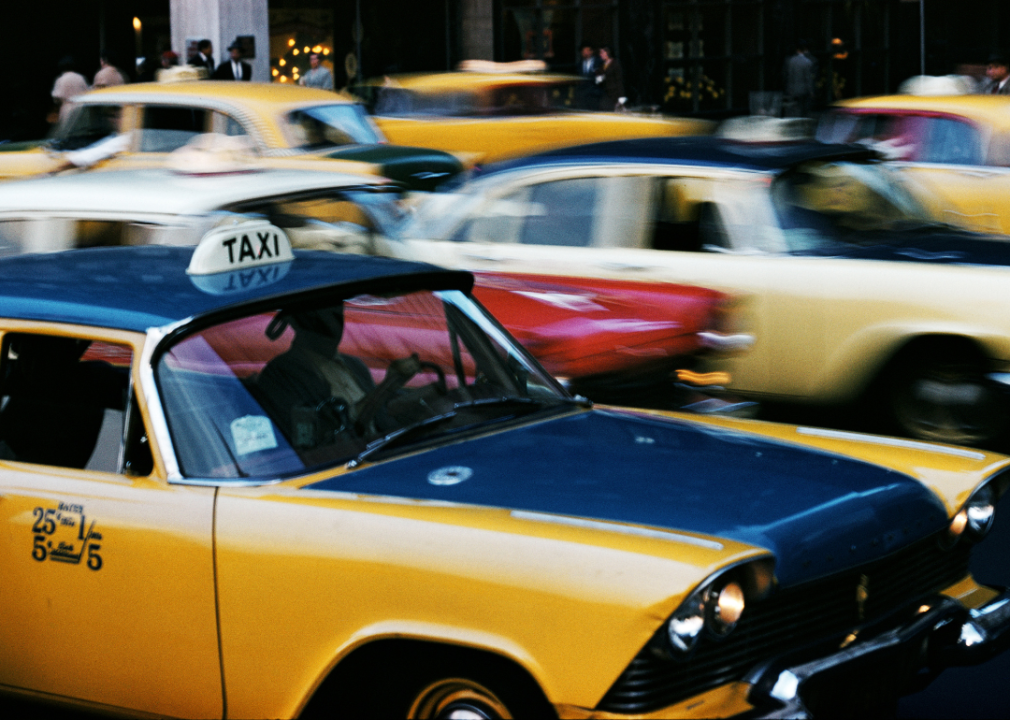 Tipping your cab driver became standard practice in the 1950s. On the other hand, certain things, like how much cabbies would charge per mile and the color of the cars themselves (yellow didn't become the required color for medallioned taxis until 1967), weren't at all standardized in the decade. 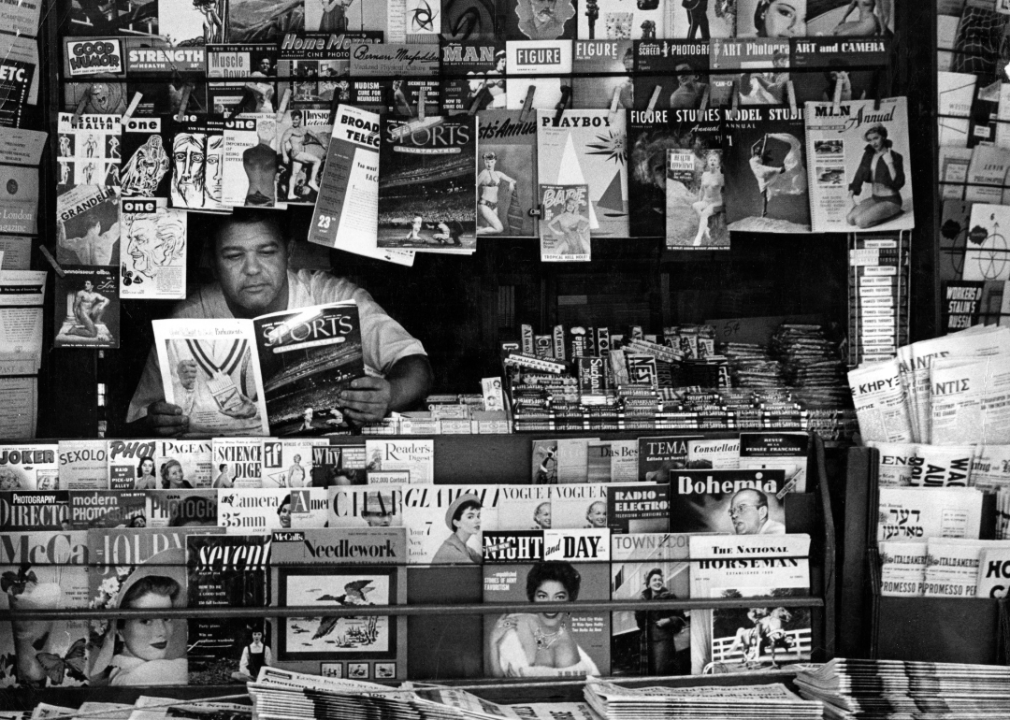 The 1950s marked the peak for independent newsstands in NYC. More than 1,500 of these booths were dotted around the city, selling everything from newspapers and magazines to cigarettes and candy.

An aerial view of Columbus Circle 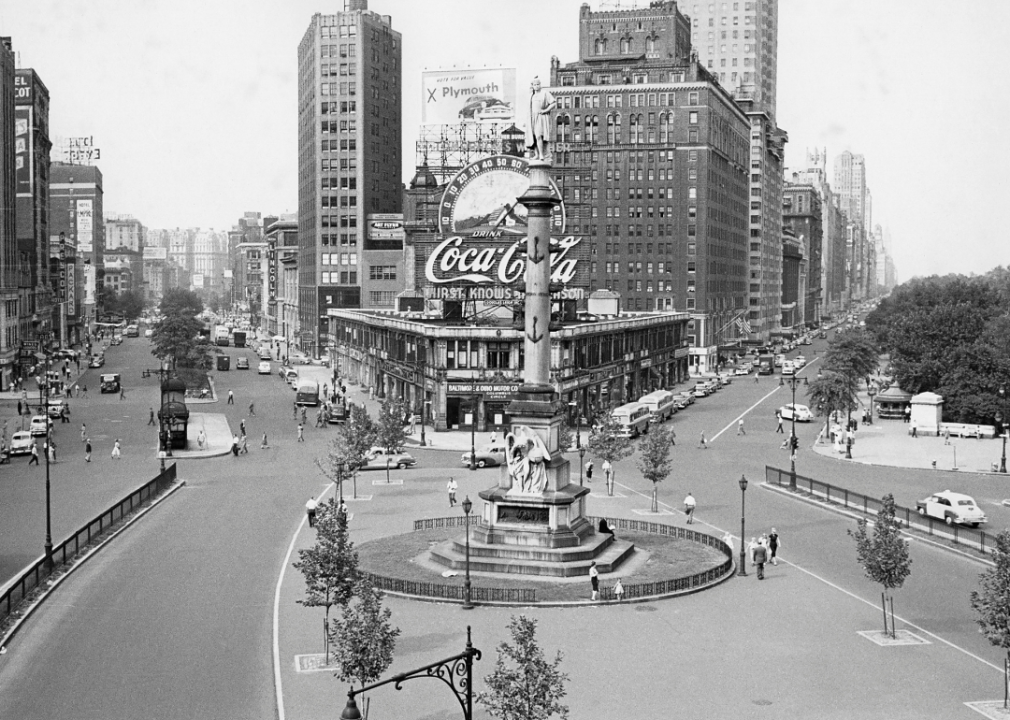 This aerial shot, taken in Columbus Circle (named for the monument located at its center) looking north on Central Park West and Broadway, shows what the midtown neighborhood looked like before high-rises took over and reconfiguration projects were completed. 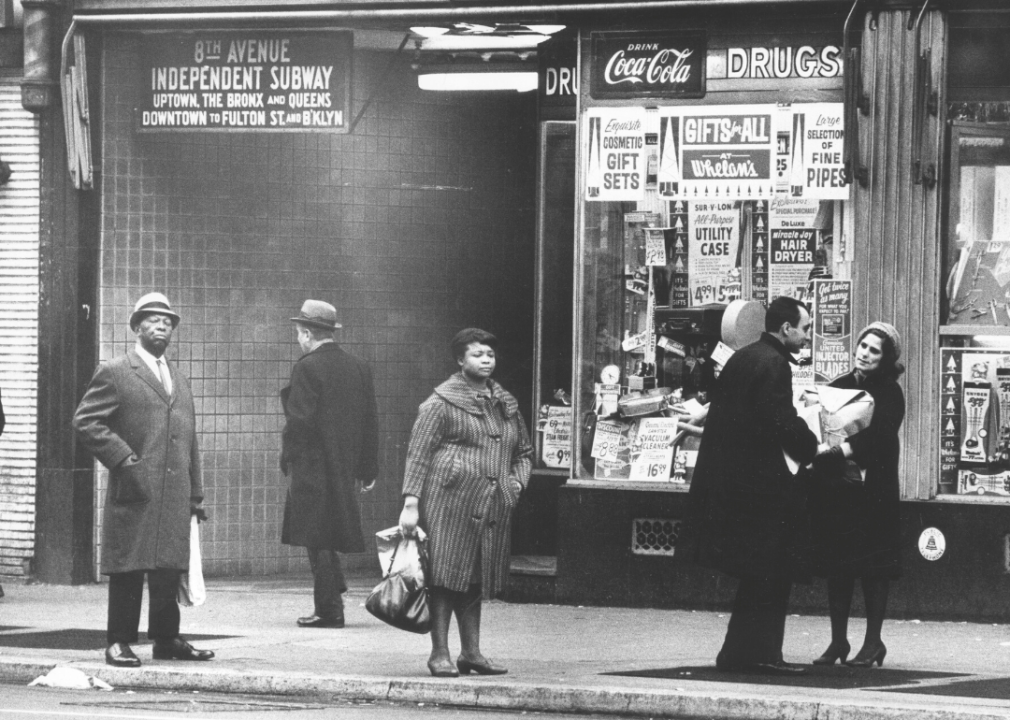 A group of well-heeled New Yorkers embark on their daily commute along 8th Avenue in Manhattan. Served by both a bus and a subway, the avenue runs from the West Village up into Harlem. 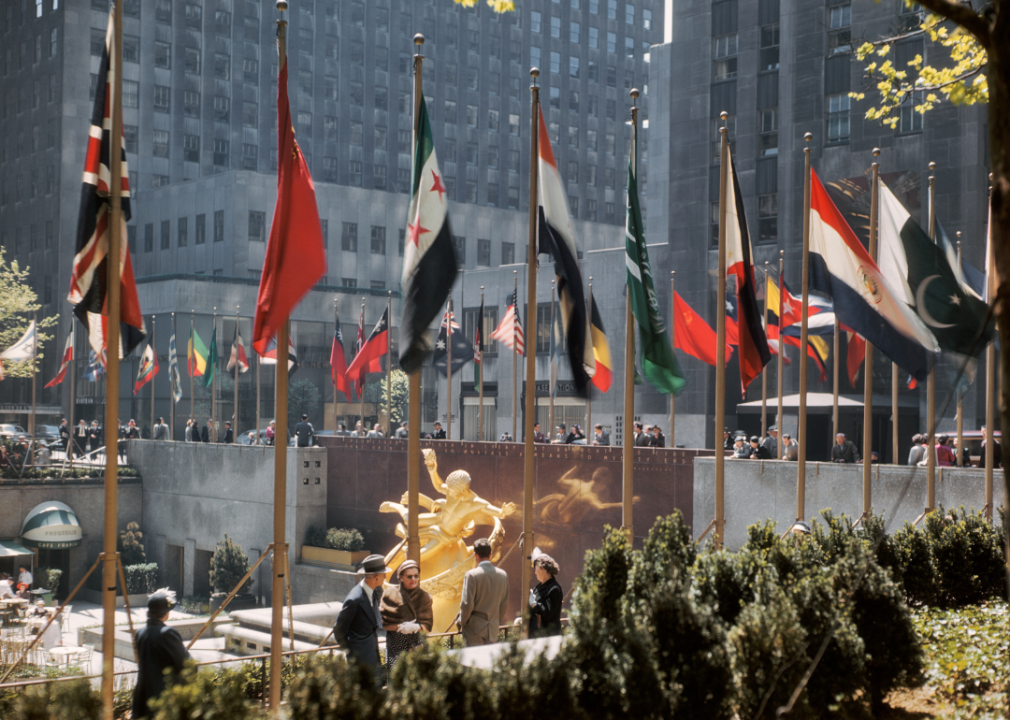 For most of the year, Rockefeller Plaza is surrounded by the flags of dozens of United Nations member countries. Given the fact that the U.N. was only established five years before this photo was taken in 1950, the flags would have been a recent addition to the plaza, which had been built in the '30s. 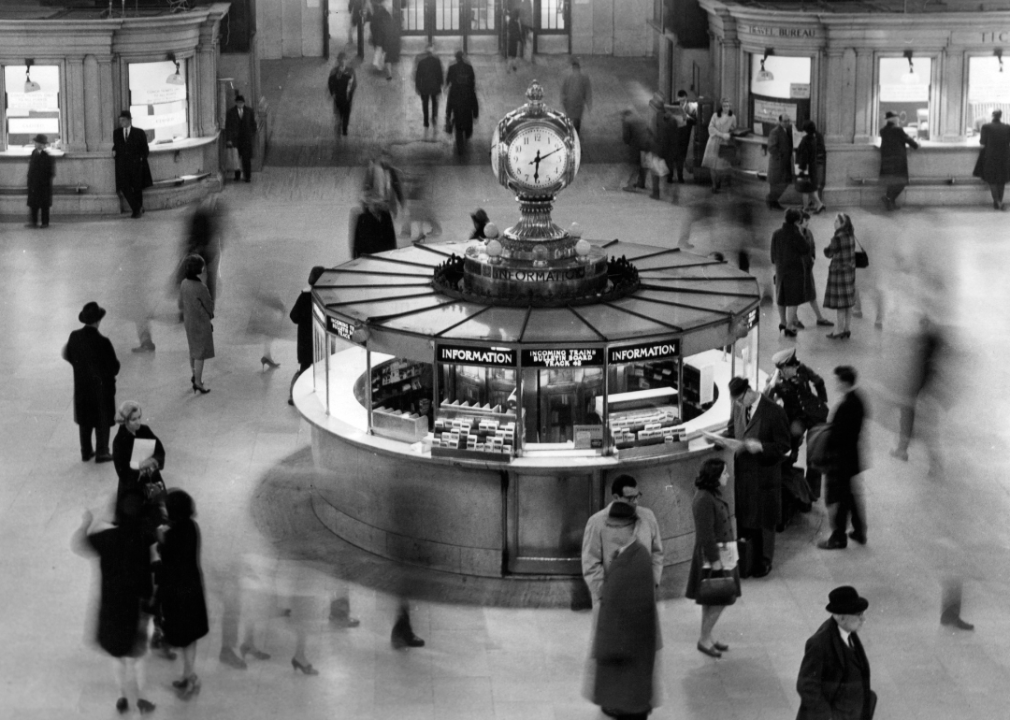 Grand Central Station, a New York City institution since its construction in 1913, almost didn't make it through the 1950s. When this photo was taken in 1955, two proposals were being considered by the New York Central System which would have seen the Beaux Arts building knocked down and replaced by a more streamlined, profitable space.

The decline of the garment district 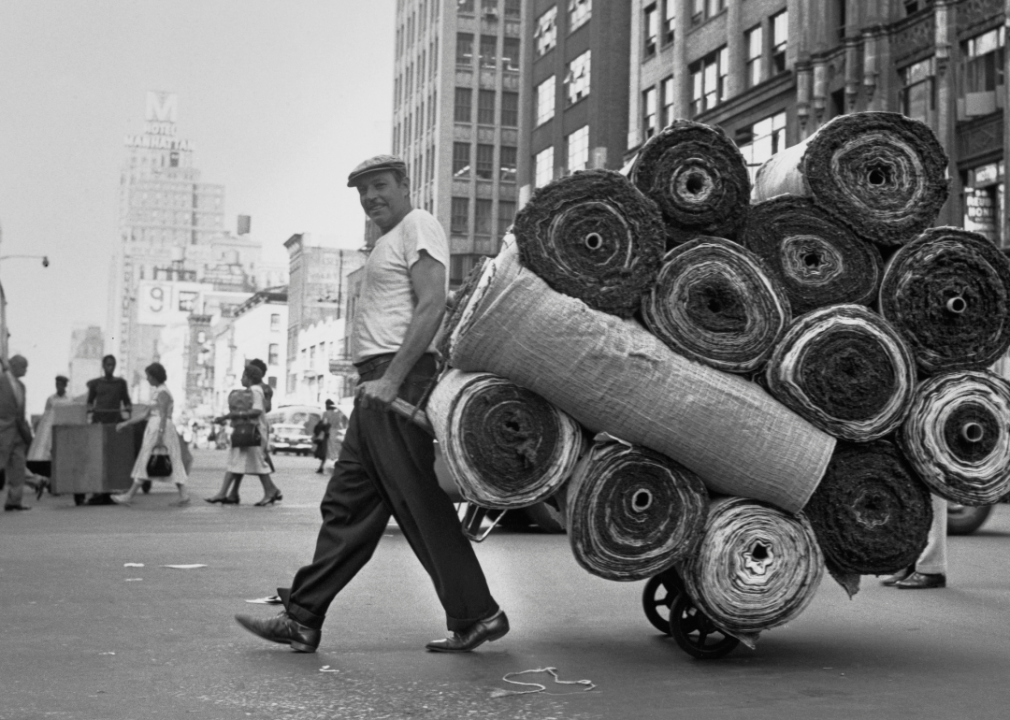 The 1950s marked a period of decline for New York's garment district (and its industry) as more casual styles, which involved cheaper labor practices, became popular. Here, a deliveryman carts reams of fabrics across 8th Avenue for one of the few remaining factories. 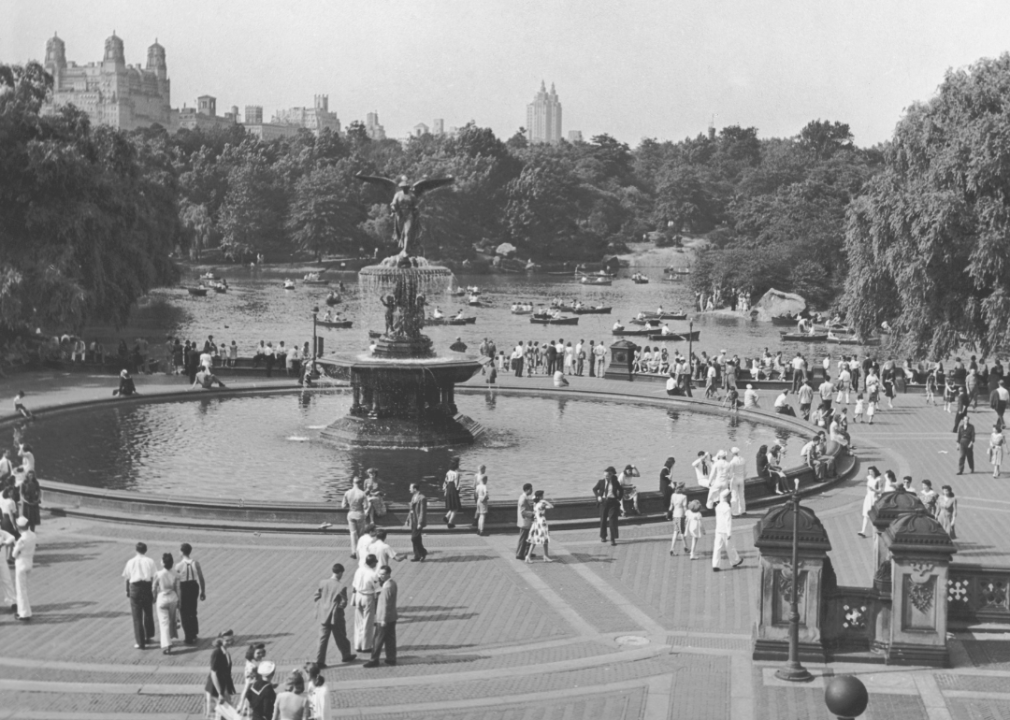 Central Park has always been a haven for New Yorkers who don't have much access to green spaces. But in the 1950s, that could have all changed when the city's parks commissioner, Robert Moses, proposed eliminating a great swath of the park, just north of Bethesda Fountain (pictured here) to create an indoor-outdoor senior citizens center. Fortunately, the public outcry was so great that he never moved forward with the plan. 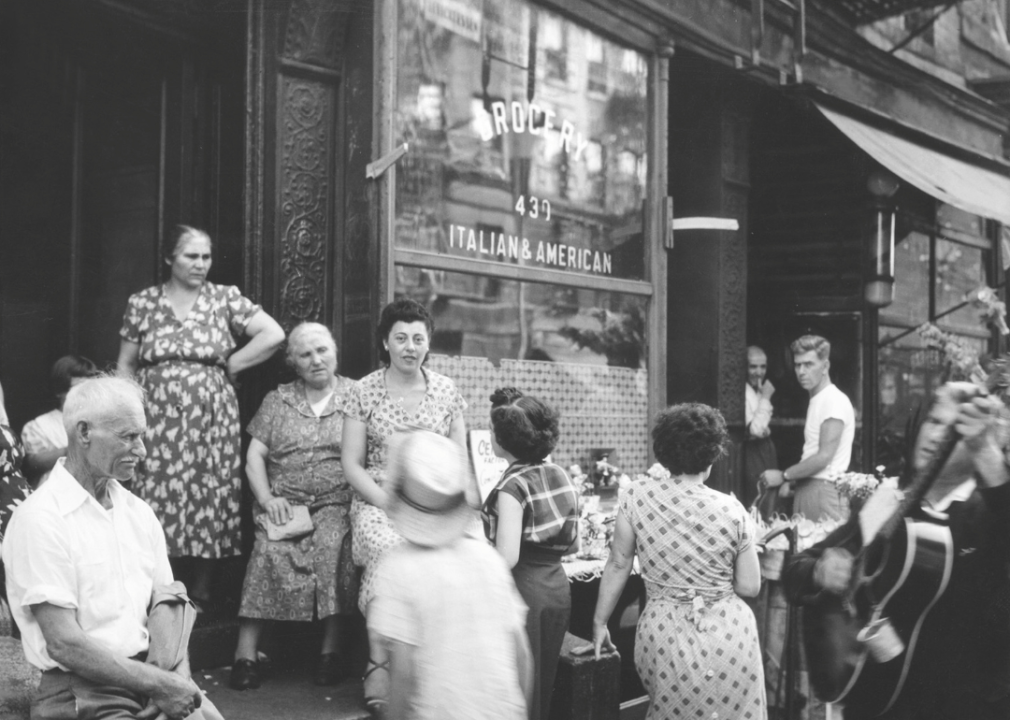 In the 1950s, Little Italy was still a fairly large neighborhood with a fairly homogeneous population (about half of the area's residents identified as Italian American). Here, a group of women congregates outside of one of the neighborhood's grocery stores. 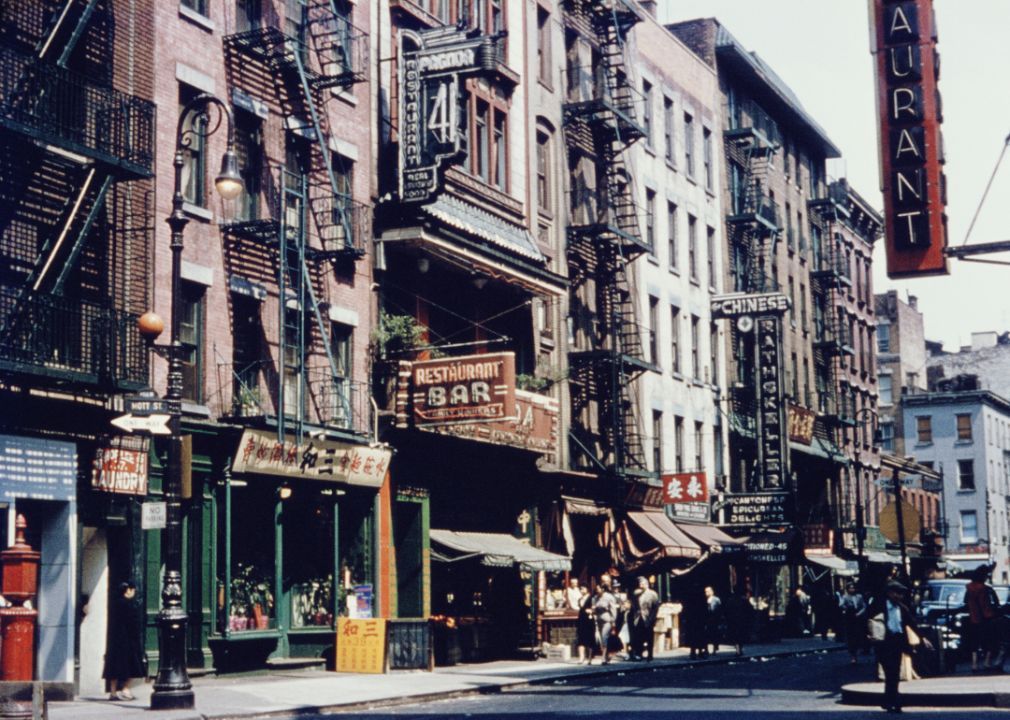 The '50s marked a period of growth for Chinatown, which neighbors Little Italy and essentially surrounds it today. This photo captures one of the neighborhood's oldest streets, which was home to both Chinese and English businesses.

A game of chess 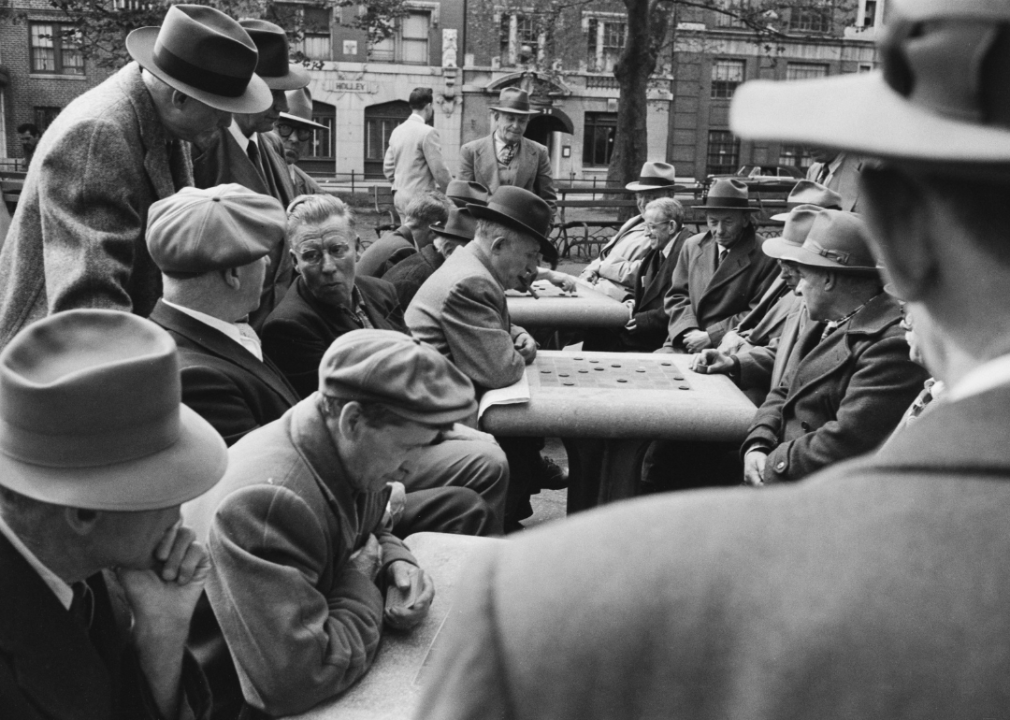 Parks have always played a large part in New Yorkers' social lives. Here, a group of men relax with chess games in a Greenwich Village park. 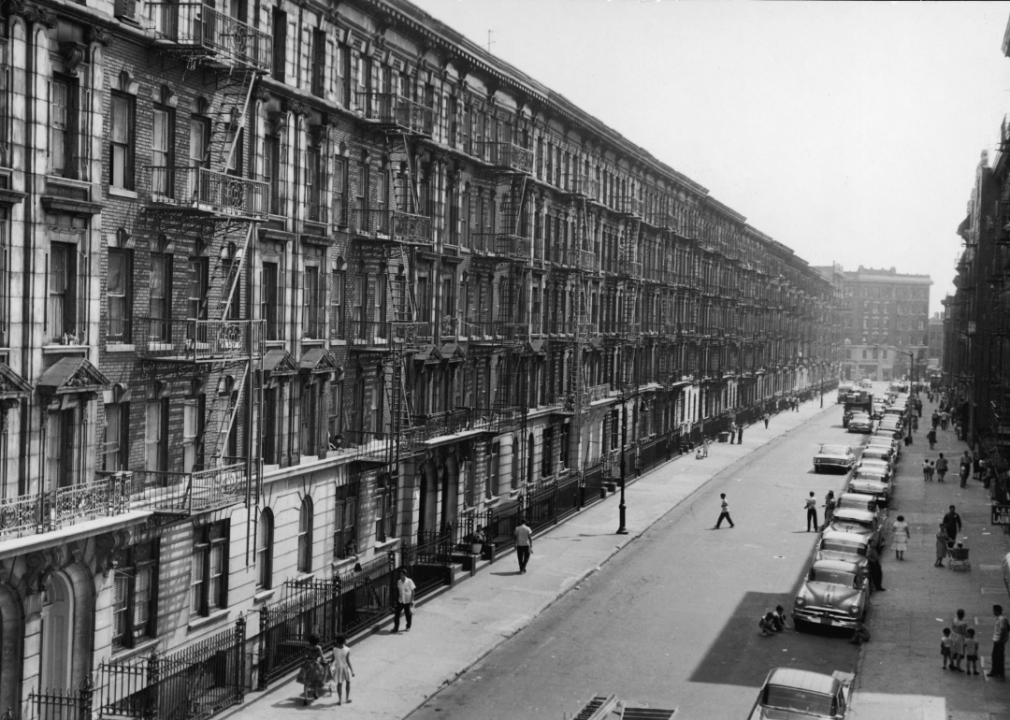 In the early 1950s, the Bronx was still a thriving, moneyed borough. The row houses, pictured here, would have been occupied by white and Jewish families. By the end of the decade, however, the acceleration of white flight meant the area was largely Black and Latino.

The Lower East Side 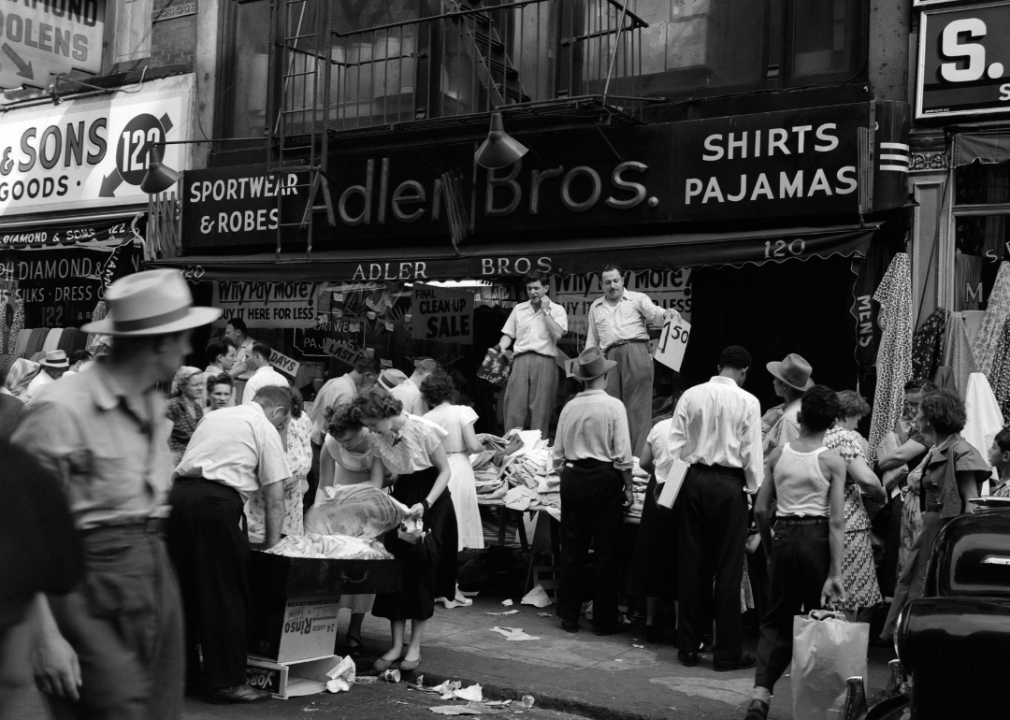 New Yorkers peruse sidewalk carts in the Lower East Side that sold everything from clothing to homewares. The area was a particularly ideal place to get delicacies that could typically only be found in other countries (Italy, Ireland, China, Germany, etc.). 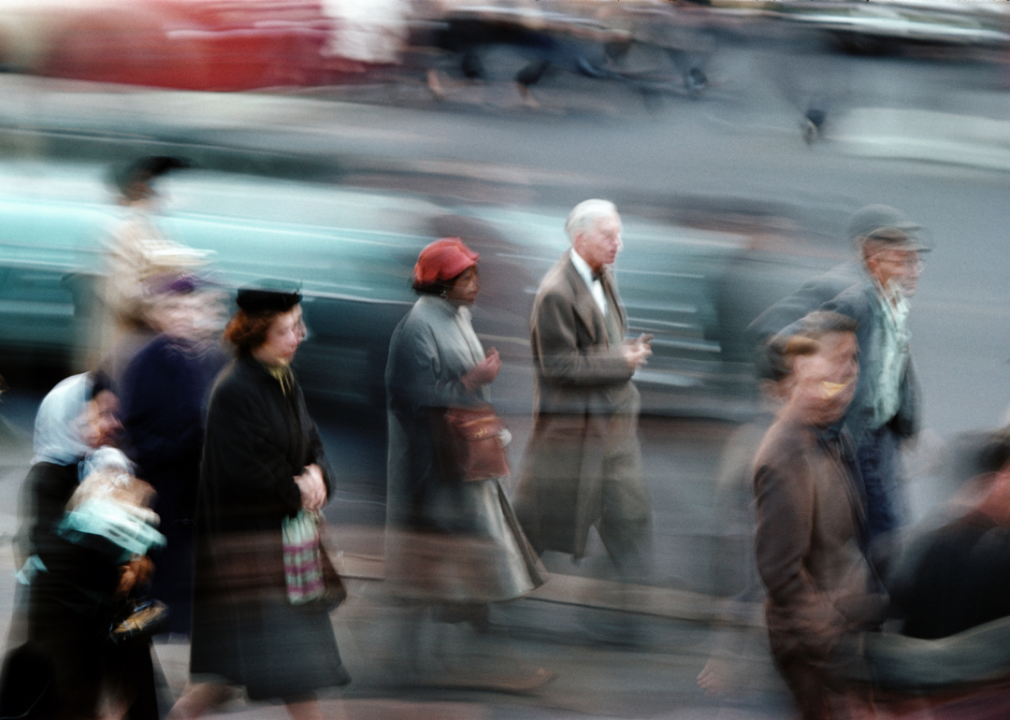 Tired from a long day in the office, these New Yorkers head home on foot. 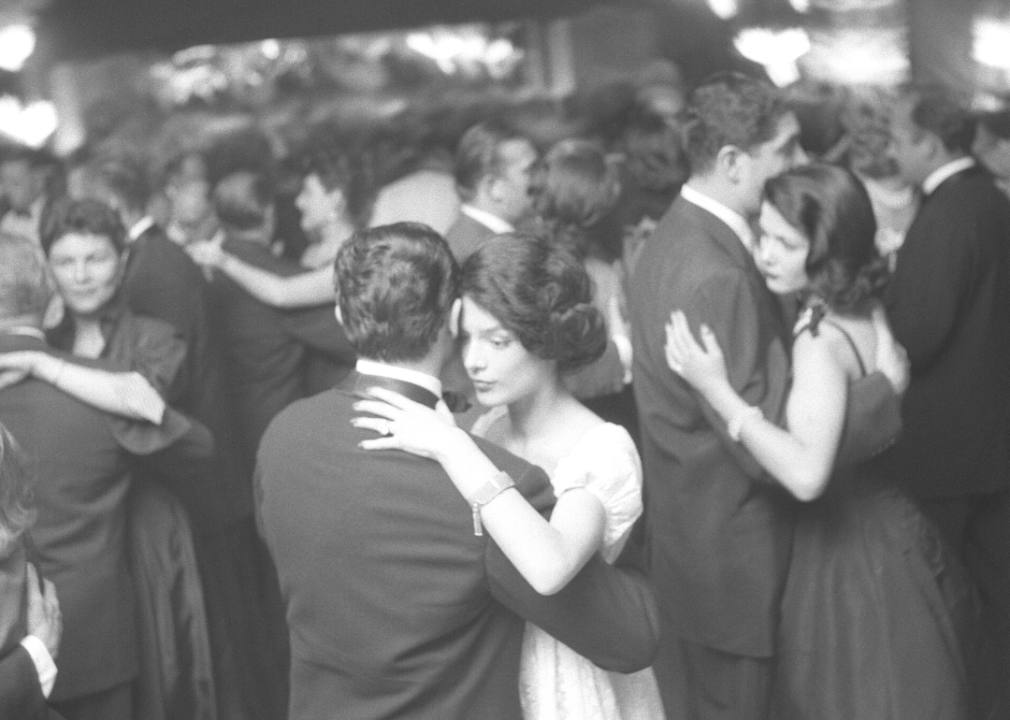 Opened in 1931, El Morocco was New York's biggest nightclub in the '40s and '50s. Frequented by the rich and famous, the hotspot was famous for its blue zebra-patterned booths and in-house photographer. In this image, taken to accompany the first print of "Breakfast at Tiffany's," couples dance cheek to cheek on the club's main floor. 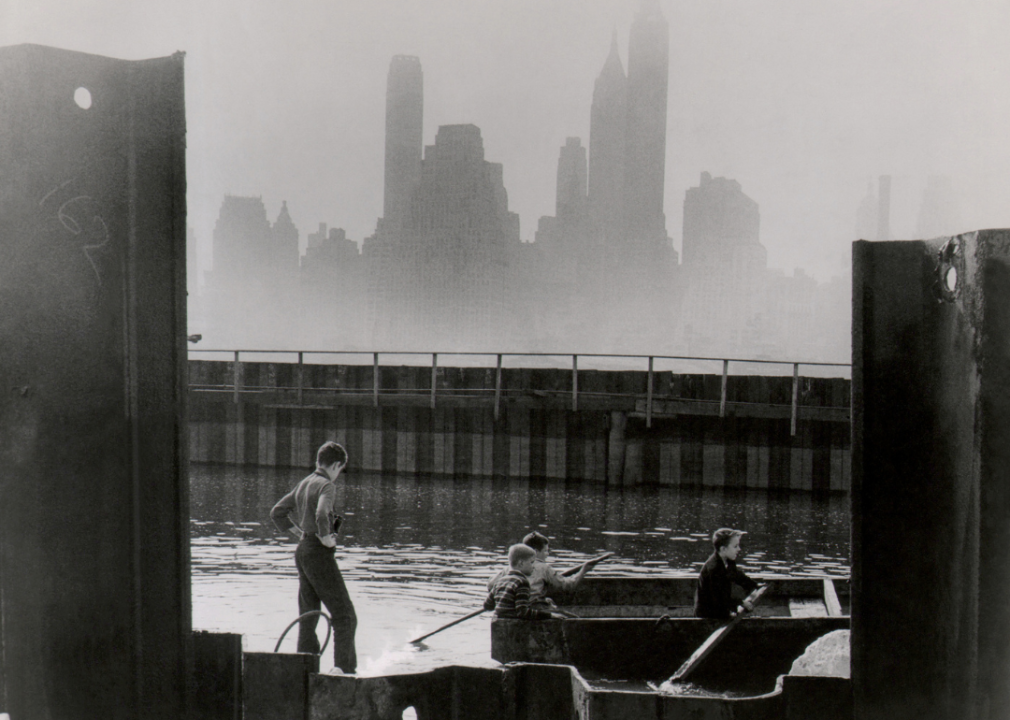 In 1950, the Brooklyn Heights Promenade, a pedestrian walkway that affords unparalleled views of the Manhattan skyline, was opened. Here, a group of boys paddle around in a canoe in the East River, with a small portion of that view in the background. 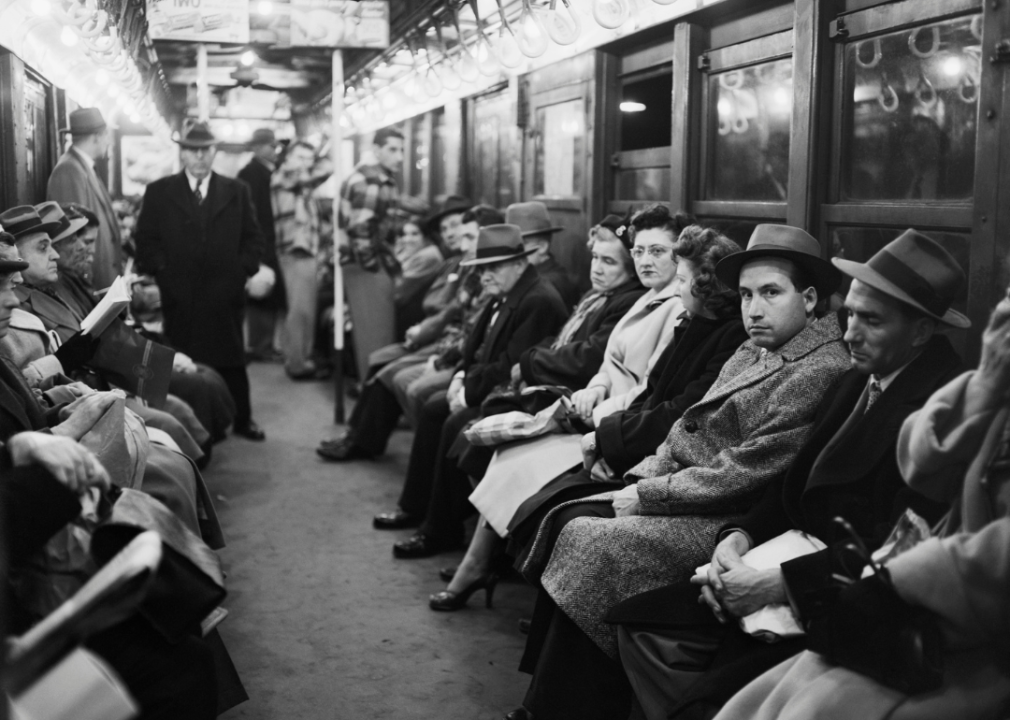 A newspaper strike in 1953, which resulted in the temporary shuttering of six daily papers, left these subway commuters with nothing to read while on their way to work. 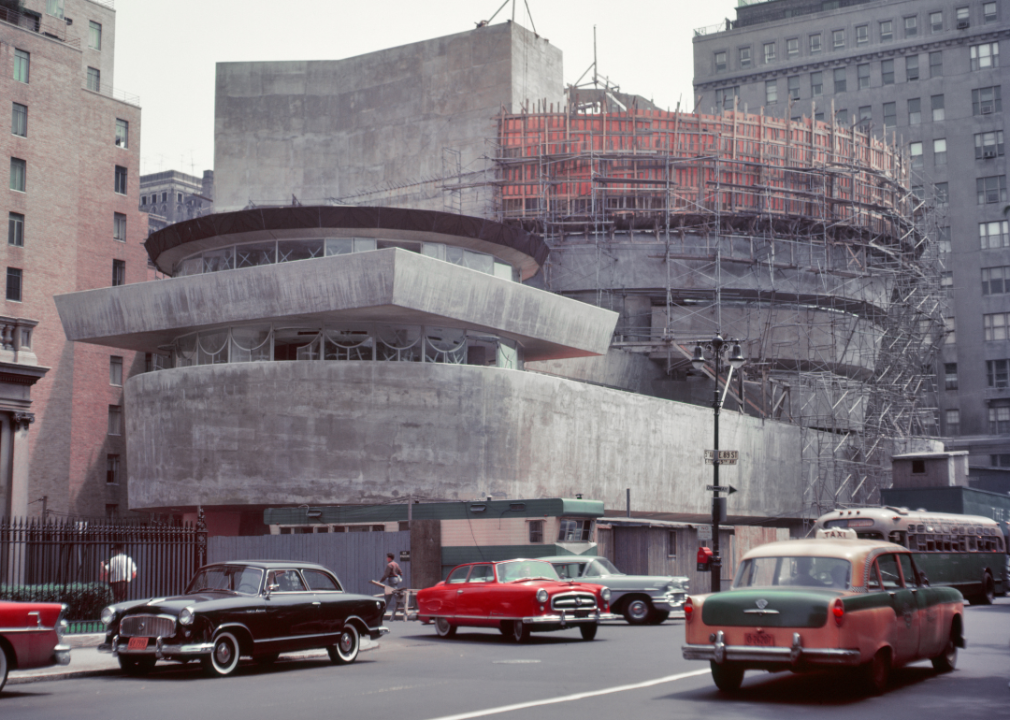 The Solomon R. Guggenheim Museum, located on Manhattan's Upper East Side, opened in 1959. Here, the modern art gallery, which was designed by famed architect Frank Lloyd Wright, can be seen during the early stages of its construction.

Sequels that made fans wait the longest