Stacker looked at current media coverage, close Senate races, and the positioning of both major political parties to determine what the results of the upcoming midterm elections could mean for the state of U.S. immigration. 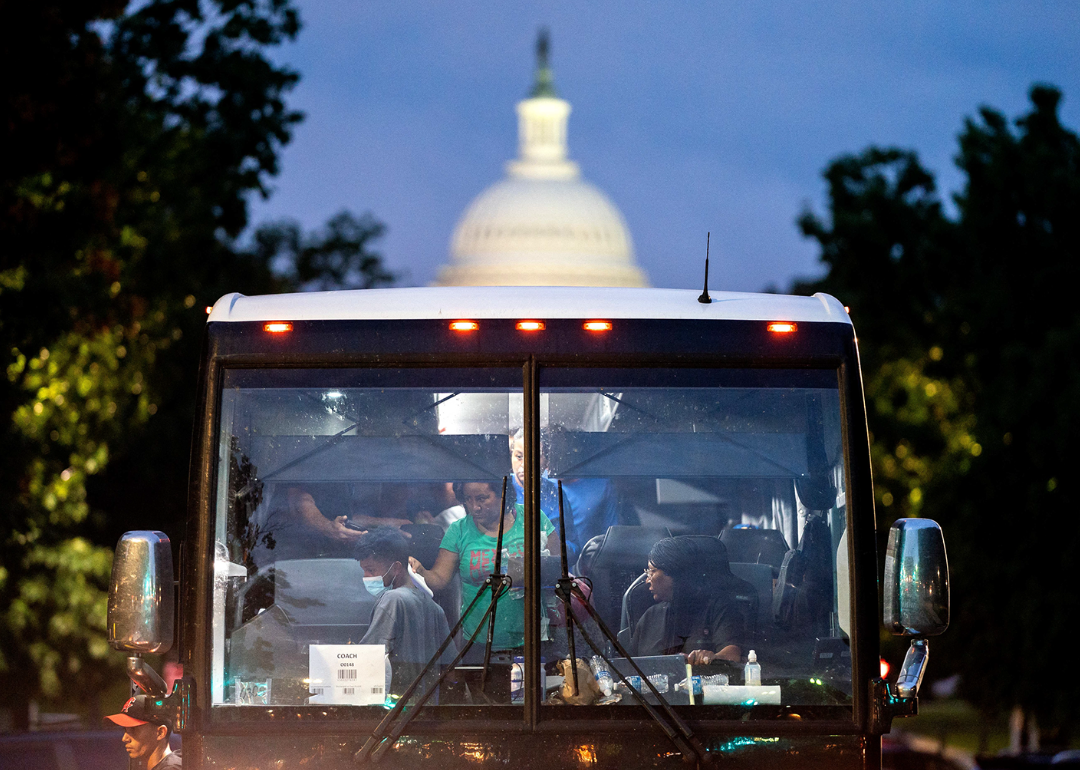 For months, the Texas Republican governor has been sending asylum seekers to Democratic-run states on buses to draw attention to how many migrants are crossing into the United States through its Mexican border. Arizona followed, and most recently, Florida's governor sent around 50 migrants to Martha's Vineyard in Massachusetts from Texas. According to officials, the migrants had been sent with the promise of financial assistance and jobs—neither of which were available.

In the run-up to midterm elections, Republicans and Democrats are voicing their views on immigration—which has become an even more partisan issue than ever.

Stacker looked at current media coverage, close Senate races, and the positioning of both major political parties to determine what the results of the upcoming midterm elections could mean for the state of U.S. immigration.

On Nov. 8, 2022, American voters will cast ballots to determine the outcome of 35 senatorial races across the country. The potential impact of new seats on legislation surrounding immigration—as it relates to the country's southern border, in particular—varies significantly depending on if Republicans or Democrats fill those seats. Republicans are more focused on border security, including deportations, while Democrats—still supporting border security—have been more supportive of paths toward legal status for immigrants and keeping families together.

You may also like: Youngest and oldest presidents in US history 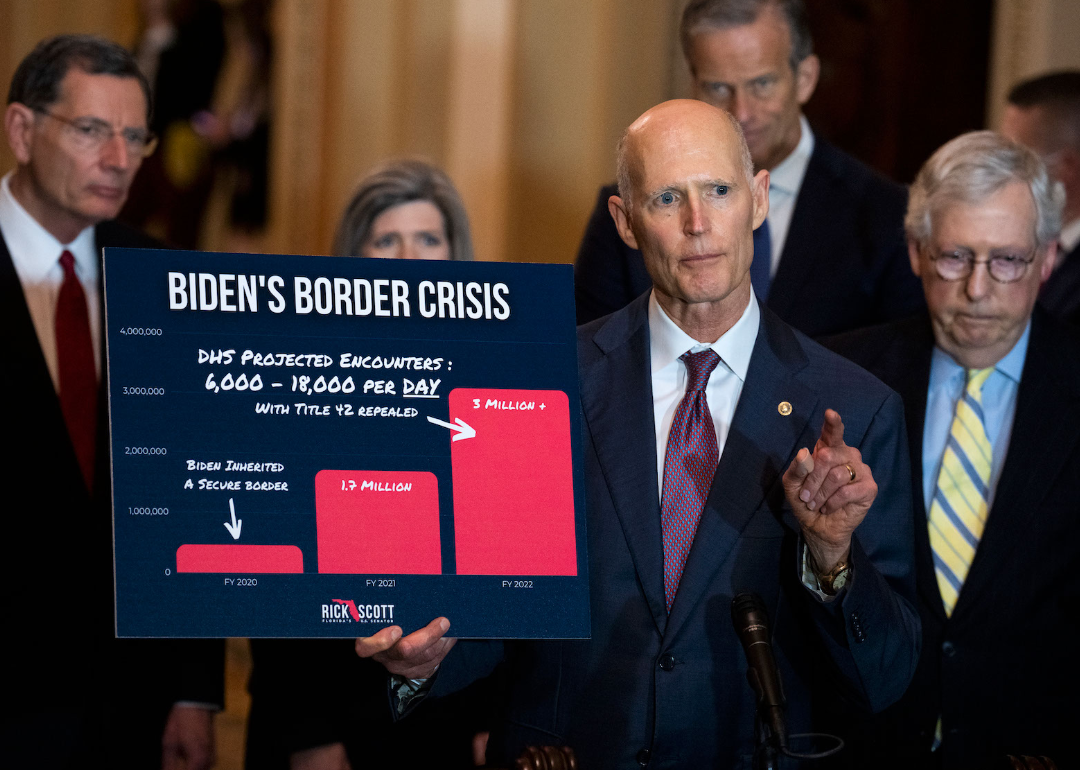 Although migrants come to the U.S. from various countries and arrive at different entry points, the national discussion around immigration primarily revolves around the influx of people crossing—or attempting to cross—the U.S. Southern border. Since Donald Trump's term as president, American support for immigrants crossing the Mexican border has decreased—and false claims about immigrants being more likely to commit crimes than U.S. citizens, being responsible for fentanyl deaths, and a whole host of other misinformation are on the rise.

Despite the decrease in support, the number of migrants hoping to cross the border continues to rise. More than 2 million people—a record high—were arrested for trying to cross the border in the fiscal year 2022. The influx of people who do make it across into small border towns puts strain on the resources of those towns, making trekking across the desert and the Rio Grande also extraordinarily dangerous. More than 745 people died trying in the fiscal year 2022.

While many Republicans favor a militant approach to keeping migrants out, including the building of a border wall, and many Democrats want to see better paths to citizenship for immigrants, the inability of the Biden administration to pass legislation to address the many concerns at the Southern border has left those on both sides, and those vying for a better life in America, in limbo. The results of the midterm elections could very well set the course of immigration policy at the Southern border well into the future.

Less discussed in the media, visa issuances are a large part of the immigration equation for the US 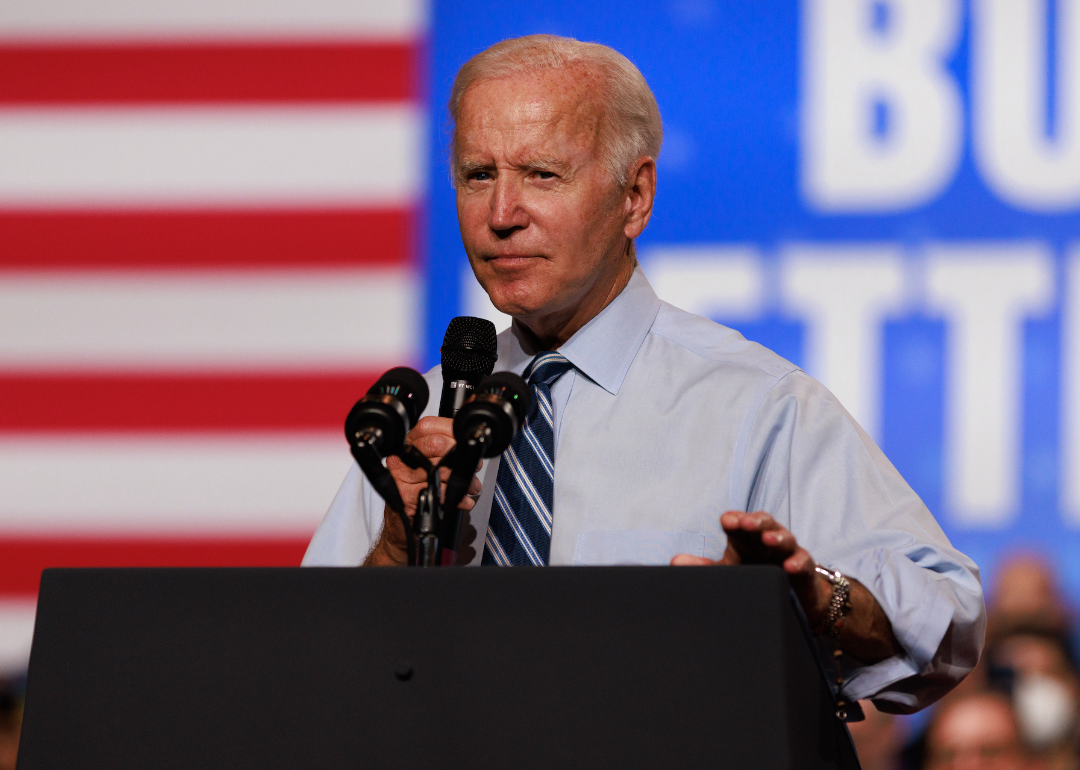 The United States issued 285,069 immigrant visas in 2021, compared to 462,422 in 2019. According to the American Immigration Council, the coronavirus and the related response from the federal government disrupted almost every facet of the immigration system, including a near halt of the State Department's overseas visa processing. Legal U.S. immigration is rebounding, but not to pre-pandemic levels.

Among the changes to immigration policy the Biden administration tackled in its first year is an increase in the number of individuals and circumstances eligible for legal protection—those who receive Temporary Protected Status, deferred action status, or refugee, asylum, or parole status. This includes the administration's humanitarian efforts to airlift people out of Afghanistan after the Taliban takeover that followed the United States' withdrawal of troops from the country in 2021. The changes made it possible for 70,000 Afghanistan nationals to be paroled, meaning they are shielded from deportation and can better procure authorization to work.

The current administration also made it possible for some U visa petitioners to become eligible for a renewable, four-year deferred action grant, an additional humanitarian protection available to victims of crimes who have assisted law enforcement. These grants allow recipients to remain in the United States and apply for authorization to work here.

You may also like: Experts rank the best US presidents of all time

Public opinion is split on how immigrants should be treated 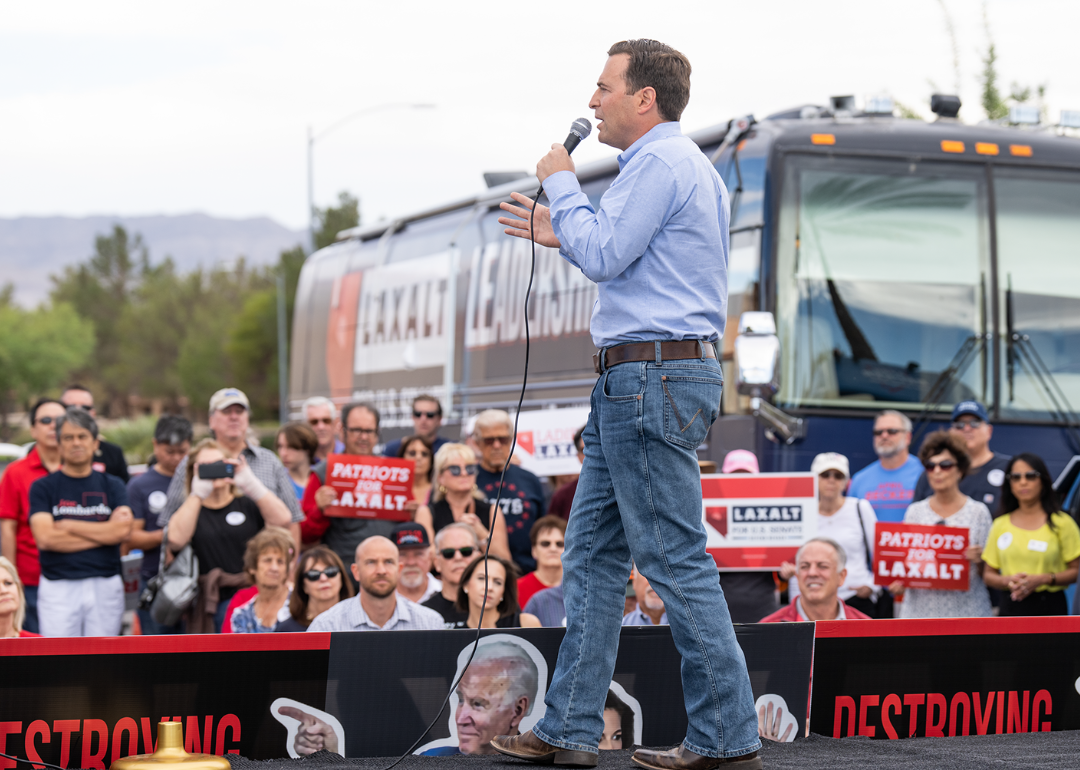 Public opinion is split between those who prefer preventing immigrants from entering the country and those who prefer creating an easier path to citizenship for them. It is also divided between political parties. A September 2022 Pew Research Center survey showed that a majority (91%) of Republican and Republican-leaning people supported increasing security along the border. While more than half of Democrat and Democrat-leaning people support greater security as well, the majority of them (88%) also want the government to focus on paving a way for immigrants to stay in the country legally. Less than 2 in 5 Republicans are in favor of that idea.

As the midterm elections approach, the division between the two parties on this issue only seems to have widened. Republicans have discussed support for states building their own walls, for more deportations, and strict policies around border enforcement. Democrats have debated the pursuit of solutions such as the affirmation of the right of people to seek asylum, the unification of families, the creation of paths toward citizenship, and the defense of the Deferred Action for Childhood Arrivals, or DACA, a program that provides reprieve to immigrants brought into the United States when they were children. 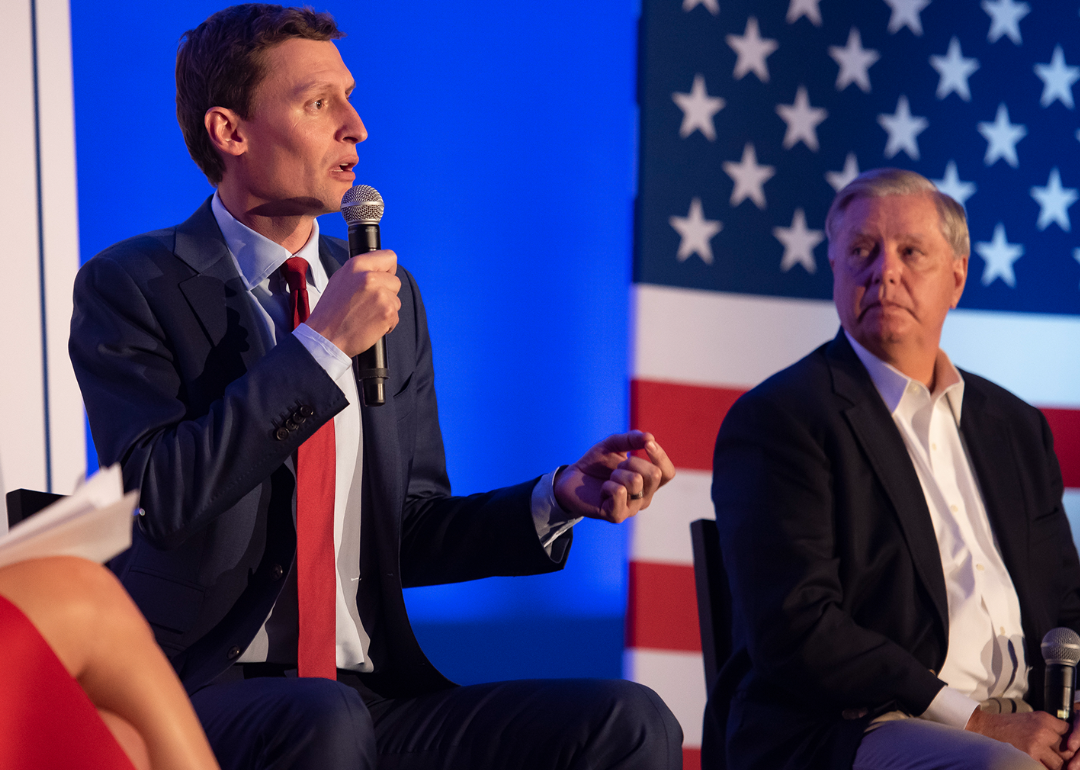 From the "great replacement theory" to referring to refugees entering the southern border as an invasion, Republicans have relied on fearmongering to promote their anti-immigration agenda. The "great replacement theory" erroneously purports that immigrants and minorities are intentionally replacing the political power, as well as culture, of whites—and it's a theory that white supremacists and anti-immigration groups have associated with their groundless argument that elites designed pro-immigration policies intending to destroy or undermine the white race. Its ideology has now become mainstream as some conservative politicians and media have given more credence to the idea that an inrush of immigrants and minorities will both alter elections in the future and erase Western nations' culture and history—with more Republican candidates embracing versions of these notions in social media, talk show appearances, and campaign advertisements.

In September 2022, House Minority Leader Kevin McCarthy revealed a plan that laid out the Republican agenda and gave an idea of how Republicans would legislate if they were to regain control of the House. He called the Republican stance on immigration the "commitment to America," which seems to reflect some of the ideology behind the "great replacement theory." Marielena Hincapié, the National Immigration Law Center's executive director, says that "commitment to America" is part of the Republican pattern of using immigrants as scapegoats for political reasons, and it is similar to when Trump used immigration to rally his base with the use of rhetoric that dehumanized immigrants.

You may also like: Experts rank the best US presidents of all time 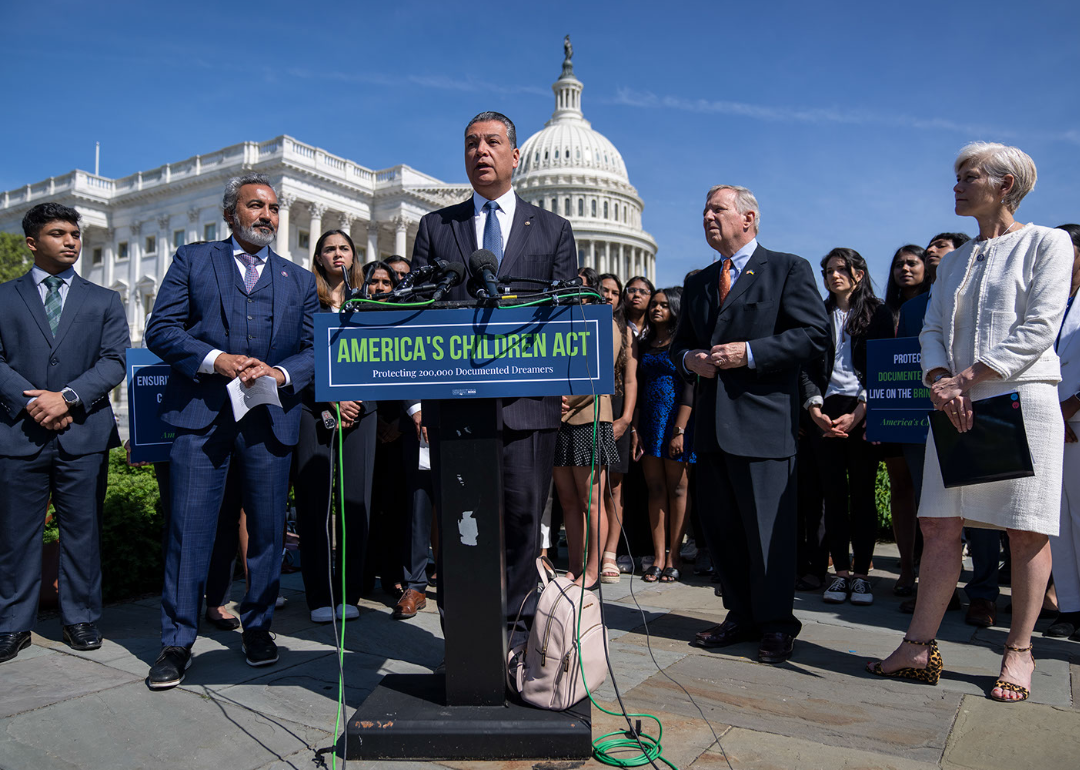 Democrats have been much more friendly to immigrants overall compared to Trump-era Republicans. They also support Dreamers, immigrants living in the United States who arrived as children through DACA. According to the Democrats' immigration reform platform, their party wants to support immigrants, especially by fighting against the separation of families while working toward immigration reform that is comprehensive, targets criminals instead of families, strengthens the U.S. economy, and improves border security.

You may also like: Every Supreme Court justice of the past 50 years