Here's how fracking and renewables are changing US energy production

Using annual report info from the Energy Information Administration, OhmConnect looked into how the U.S. generates its power, and how the rise of renewable energy fits into the future landscape. 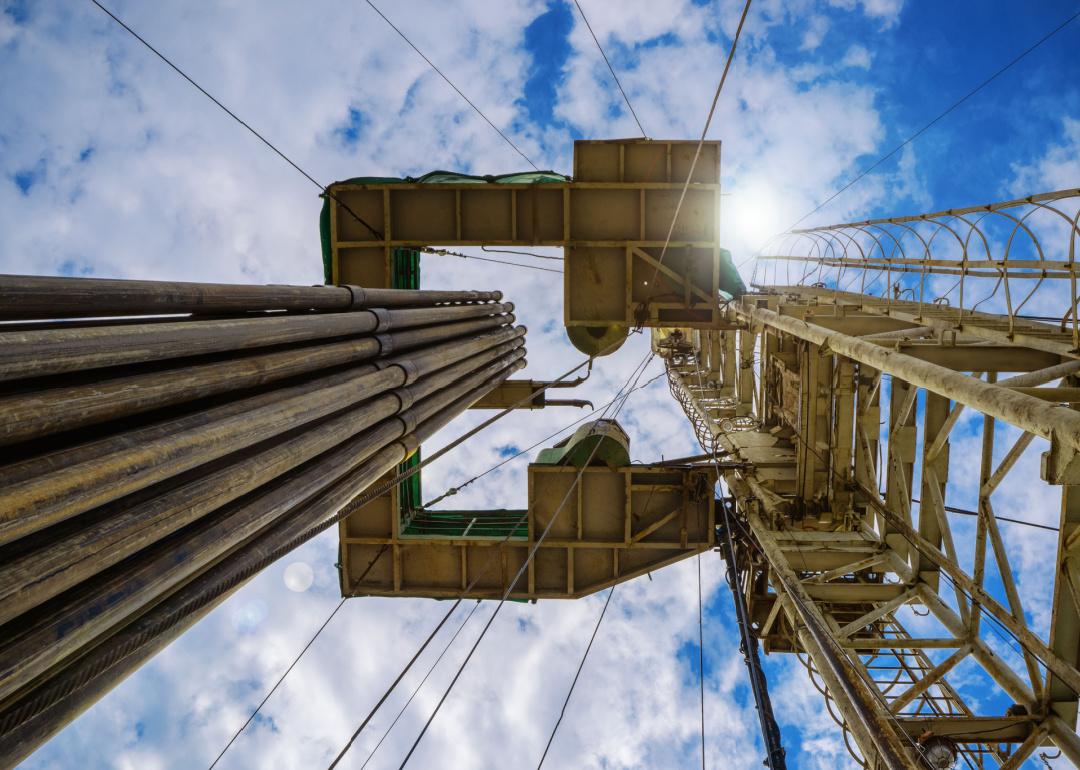 The use of renewable energy sources is on the rise in the U.S., which may be a welcome relief to both Earth and its inhabitants. Sourcing energy from renewables such as solar power, hydropower, and wind offers a plethora of health and sustainability benefits, especially compared to energy sources that release greenhouse gases into the atmosphere. Considering the volume of U.S. energy use, national over-reliance on GHG-emitting energy sources has been a cause for concern in most scientific circles for decades.

Currently, the residential and commercial sectors of the U.S. each consume between 4-7 quadrillion Btu, or British thermal units, of energy annually, while the industrial and transportation sectors use between 22-27 quadrillion Btu. By far the largest energy consumer in the U.S. is the electric power sector, which gobbled up more than 36 quadrillion Btu in 2021.

Unfortunately, renewable energy source use pales against sources like natural gas. The Energy Information Administration found that since 2000, natural gas use in the residential sector alone has been more than three times that of renewables, despite an uptick in renewable sourcing since 2010. In the commercial sector, the difference is even more extreme, at nearly four times that of renewables. So, it is of little surprise that hydraulic fracturing (or fracking), which is the method by which natural gas is extracted, dominated U.S. energy production in 2021—a year that also marked the third in a row that annual energy production exceeded energy consumption in the U.S.

Fracking is a process fraught with controversy. While it has been a major industry in states like Pennsylvania, Ohio, Texas, Colorado, and the Dakotas for several years, it came to widespread public attention during the 2020 presidential campaign, when both then-President Trump and President Biden used it as a hot-button issue to make their respective energy stances known. The process is currently having a moment in the U.K. as a plinth from which the political right is attempting to address the nation's energy crisis.

Both renewables and natural gas energy production reached record highs in 2021; however, even though incentives such as tax credits encourage increasing the use of renewables, fracking remains popular, as it offers what its supporters describe as a much-needed clean energy alternative to petroleum.

Using annual report information from the Energy Information Administration, OhmConnect looked into how the U.S. generates its power, and how the rise of renewable energy fits into the future landscape. 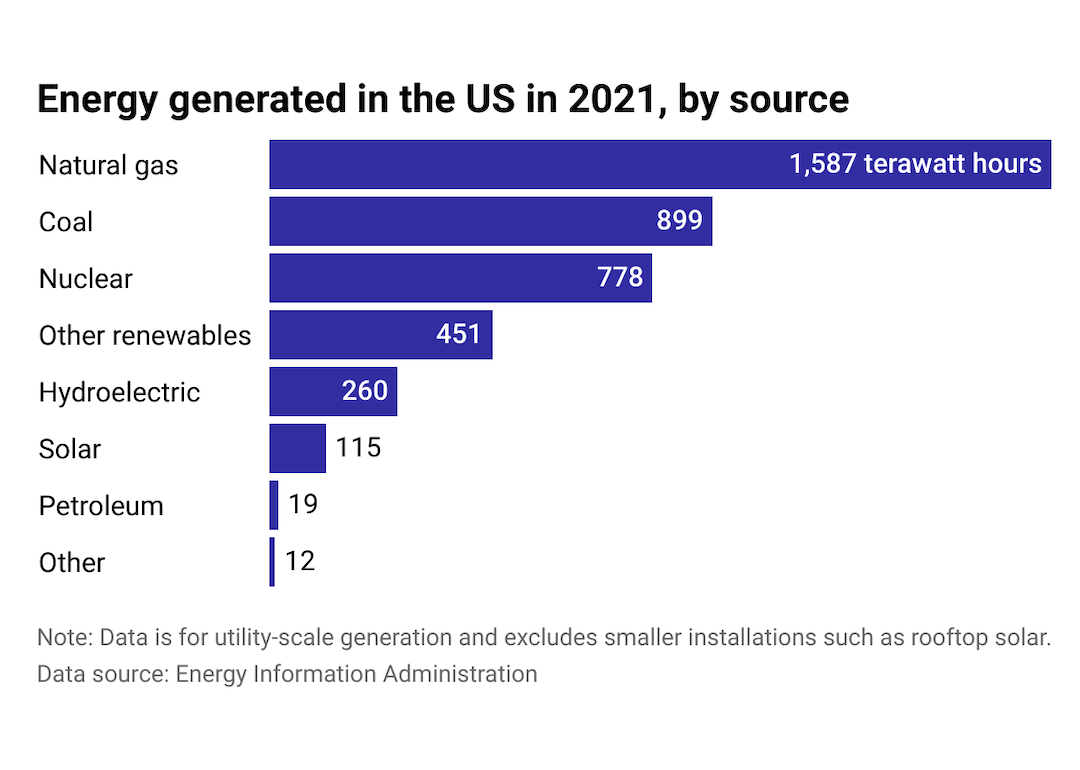 In 2021, the U.S. produced just over 4.1 trillion kWh of electricity, of which 38.3% came from natural gas. As electricity is the greatest form of energy consumed in the U.S., this figure almost by itself is indicative of overall national energy production and use.

The EIA found that 36% of all energy consumption was derived from natural gas last year. Natural gas begins as wet natural gas when it is extracted from wells; it is "wet" because at this stage it contains water vapor and natural gas liquids such as propane, ethane, and butanes. Once separated from these compounds, it becomes dry natural gas, at which point it is distributed to consuming industries—primarily the paper, coal, and chemical industries.

Most natural gas in the US comes from fracking, a controversial extraction method 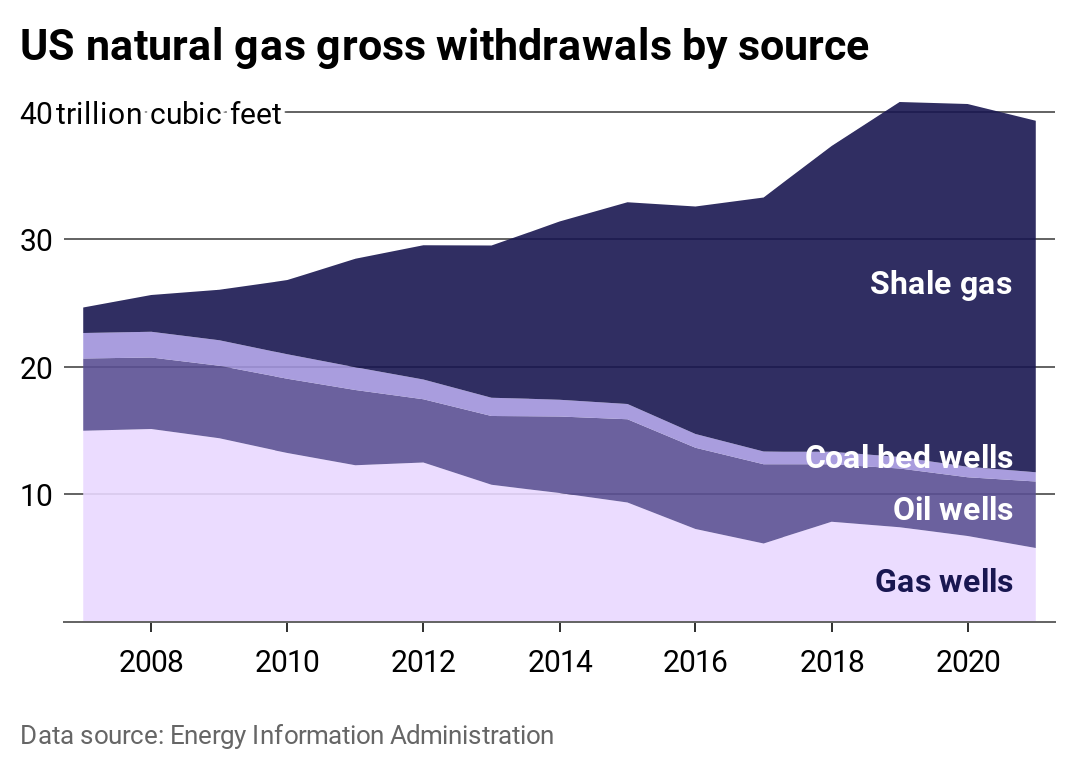 Natural gas is overwhelmingly released through fracking, a process whereby shale rock is drilled into, and water and sand are injected underground at very high pressure until the rock formation below fractures and emits the natural gas within it. Though natural gas could also be released through natural oil wells, hydraulically fractured wells now produce the majority of natural gas, accounting for 69% of all oil and natural gas wells in the U.S. in 2016.

Fracking is a controversial practice due to its detrimental environmental impacts, including air pollution, groundwater contamination, and seismic triggers. So concerned are opponents of fracking that the practice was banned in the U.K. in 2019 following criticism from the Oil and Gas Authority. However, this past spring, in the wake of economic strains from rising energy costs largely due to the ongoing conflict in Ukraine, the ban was lifted. 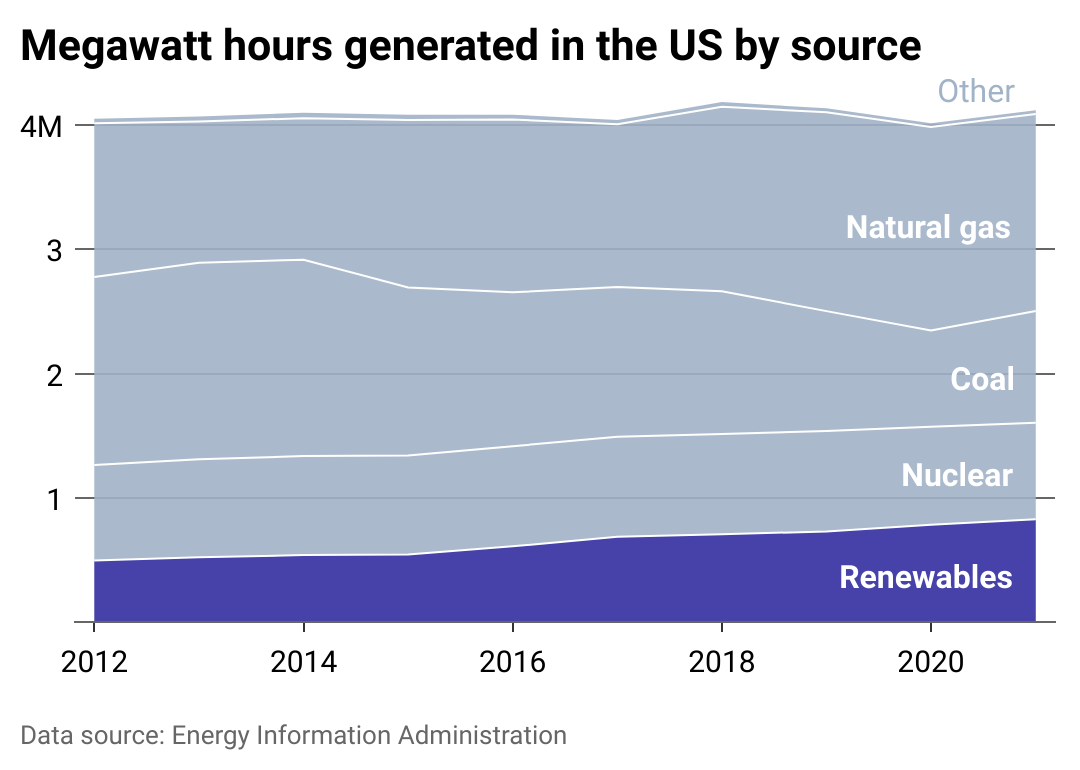 While dry natural gas leads the way in U.S. energy generation, renewables also play a large role—and one that continues to increase. From 2012 to 2021, renewables—including wind, solar, and hydroelectric power—have steadily increased their contribution to U.S. energy production. Generation from renewables even surpassed nuclear sources in 2021.

Although renewable energy sources cannot be fully depleted due to their cyclical nature (hence the name "renewables"), they are limited in how much energy they can produce within a given time frame. Though hydropower and wood dominated renewable energy sources used in the U.S. for many decades, the use of solar and wind energy, as well as biofuels, has increased notably over the past 30 years. 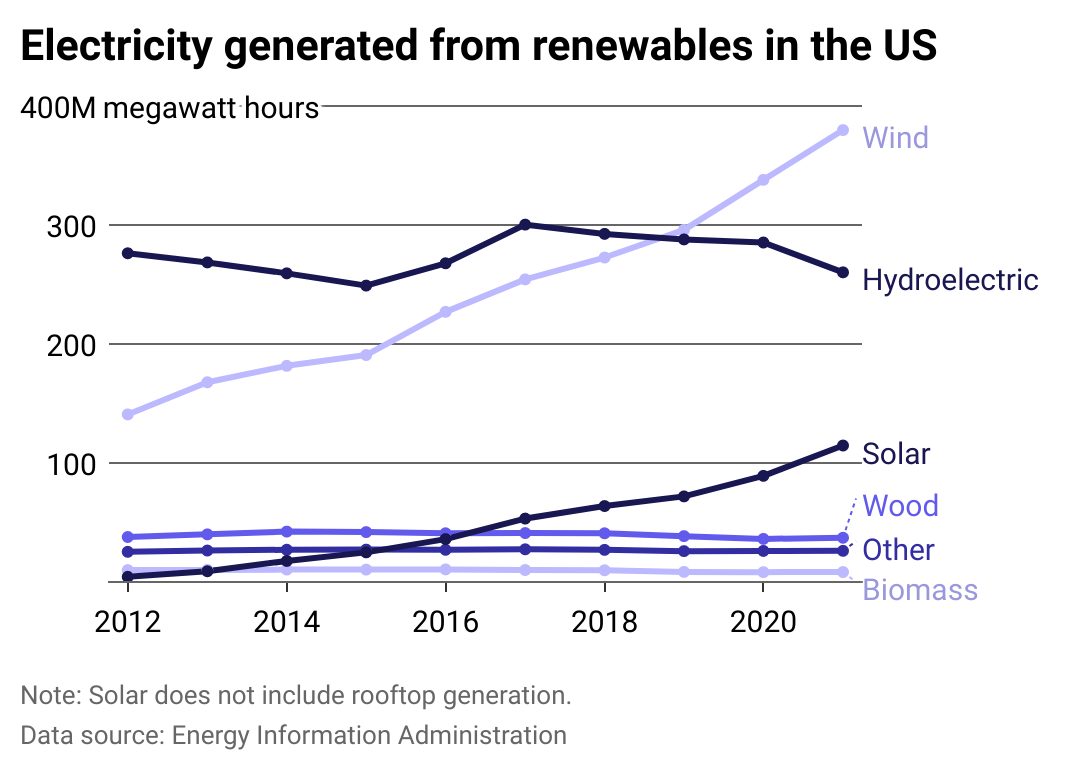 Wind generation tops renewable energy source production in the U.S. and has seen rapid growth since 2012—169% growth to be exact. While that is an impressive boost, solar power has grown more than 3,000% in that same time period, rising to become the third-most prominent renewable source. The U.S. currently has enough solar power capacity to power 18 million homes, and more than 3% of electricity in the country is from solar panels.

Even with the rise in renewables, overcoming dependence on fossil fuels won't happen without drastic policy changes 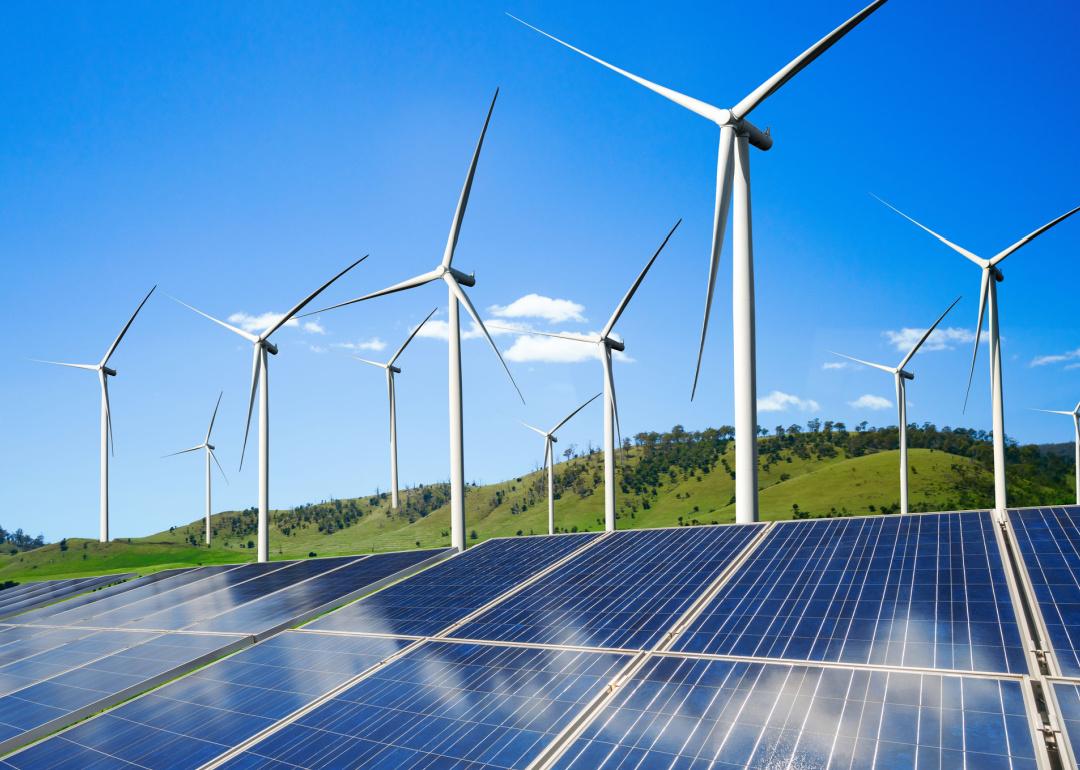 Although the use of renewable energy sources has steadily increased in the past three decades, it will be a long time before renewables overtake the use of fossil fuels, particularly natural gas. Incentives like tax credits can encourage a shift in usage, but ultimately, policy changes will be necessary for a dramatic revamping of energy sources in the U.S., which remains the world's largest extractor of oil and gas. Current fracking projects planned in the U.S. may result in as much as 140 billion metric tons of greenhouse gases.

The 2005 Energy Policy Act put the onus on state governments to regulate fracking within their borders, under the umbrella of regulating underground drinking water sources. Although the Biden administration has advocated for banning new fracking operations on federal lands, it stopped short of taking a hard stance against fracking altogether. Two years into the administration, there has yet to arise any significant curb to the practice.

This story originally appeared on OhmConnect and was produced and distributed in partnership with Stacker Studio.